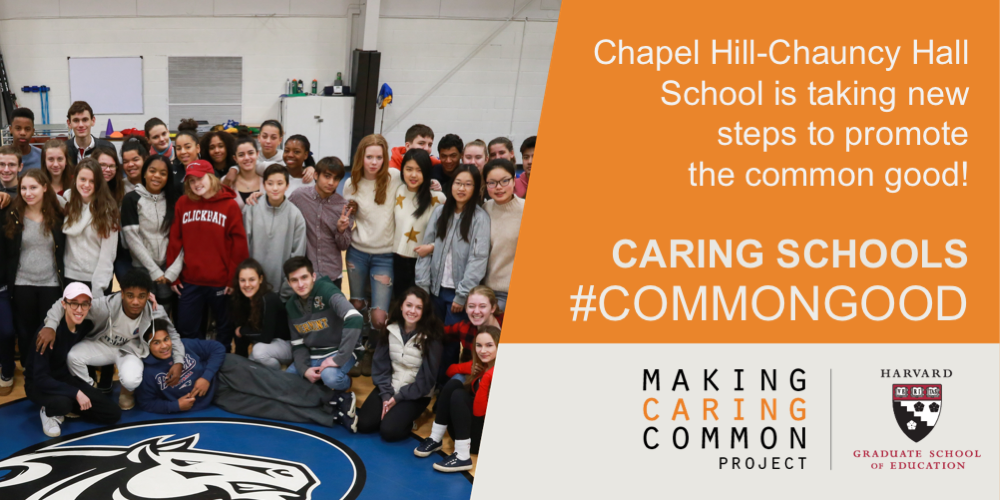 Chapel Hill-Chauncy Hall is among the nation’s first schools to join a new national campaign to mobilize middle and high schools to prepare young people to be constructive community members and citizens who create a better world. Led by Harvard’s Making Caring Common project, the Caring Schools #CommonGood campaign aims to motivate schools to take action to help mend our country’s fractures and strengthen democracy.

“The Making Caring Common project could not have come at a better time,” said Josh Bubar, Assistant Head of School at CH-CH. “Our students are about to enter a society where the ability to empathize with others, and see the world from multiple points of view, is of vital importance to solving the truly global problems that face us today. It is part of our role to prepare our students for that world and enable them to make a difference in their communities both during their time here and after they leave us.”

The campaign seeks to advance the following specific goals by working with schools nationwide:

These goals align with and build on Making Caring Common’s successful Turning the Tide initiative that has engaged more than 175 college admissions offices nationwide.

“Our country is at a crossroads,” said Dr. Richard Weissbourd, Senior Lecturer at the Harvard Graduate School of Education and Faculty Director of the Making Caring Common project. “We need to mobilize the great strengths of Americans to prepare young people to build strong, inclusive communities and to protect democracy. This work has perhaps never been more important.”

Chapel Hill-Chauncy Hall was one of more than 135 schools that joined the campaign as “early leaders” who helped to inform, shape, and build momentum for the campaign. CH-CH’s commitments include:

This work will be led by Josh Bubar, Assistant Head of School, as well the program directors, Kelly Walsh and Ben Riggs, and the grade level deans.

As part of the launch, CH-CH today is joining other early leaders on Facebook and Twitter using the Caring Schools #CommonGood hashtag to express support for the campaign, publicly commit to a chosen action(s), and encourage schools nationwide to join the effort. New schools interested in joining the campaign are encouraged to share a photo and use the text “Count us in! We’re joining the Caring Schools #CommonGood campaign” on Facebook and Twitter on March 6.

More information about how schools, parents, and students can join the campaign can be found at commongoodcampaign.makingcaringcommon.org.