Monsters, Sword Fights, and the Return to Theatre at CH-CH 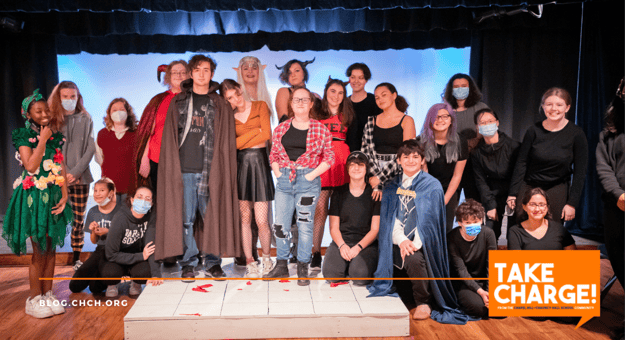 CH-CH’s Theatre Program Director, Bekah LaCoste, can’t help getting emotional when she thinks about how long the road has been for students to be able to perform in a theater for live audiences again, and how incredible the impact was. “Hearing laughter in the space, in such a big voluminous way, is so inspiring,” she said, wiping away tears. “It made everyone remember how valuable theatre is, to everyone involved.”

See the full photo album from She Kills Monsters here.

This fall, CH-CH students returned to the newly opened Mankiw Theater, for the production of She Kills Monsters by Qui Nguyen. The production was ambitious for many reasons, and it was a challenge that everyone involved was ready to face head-on.

Back in the Mankiw Theater

“It had been so long since we’d had a live audience in the space, and it brought a new sense of urgency to being a part of the cast and crew,” said LaCoste. VIDEO: Students warm-up for the opening night performance of She Kills Monsters.

Throughout the pandemic, theatre continued at CH-CH, in several creative ways. From student-written shorts that were broadcast live via Zoom, to productions under a tent with distanced seating and face coverings. All of these performances were important ways to continue moving forward, creating, and bringing the community together.

Members of the cast, crew, and audience were all thankful to be back in the Mankiw Theater this fall. The first time that the students performed in front of a live audience for this production was at the invited dress rehearsal, and it immediately made an impact on the students.

“Having an audience brought so much more life,” said cast member Andy H. ‘22, member of the cast. “We read through the show so many times, but to see the audience react to these jokes and die laughing was really rewarding.”

As you may guess from the title, She Kills Monsters, involves a lot of fighting. To ensure that all of this fighting and weapon work was done safely and effectively, CH-CH brought in a professional fight choreographer. They were an important piece to this production, ensuring that the fighting looked authentic on stage while remaining safe. 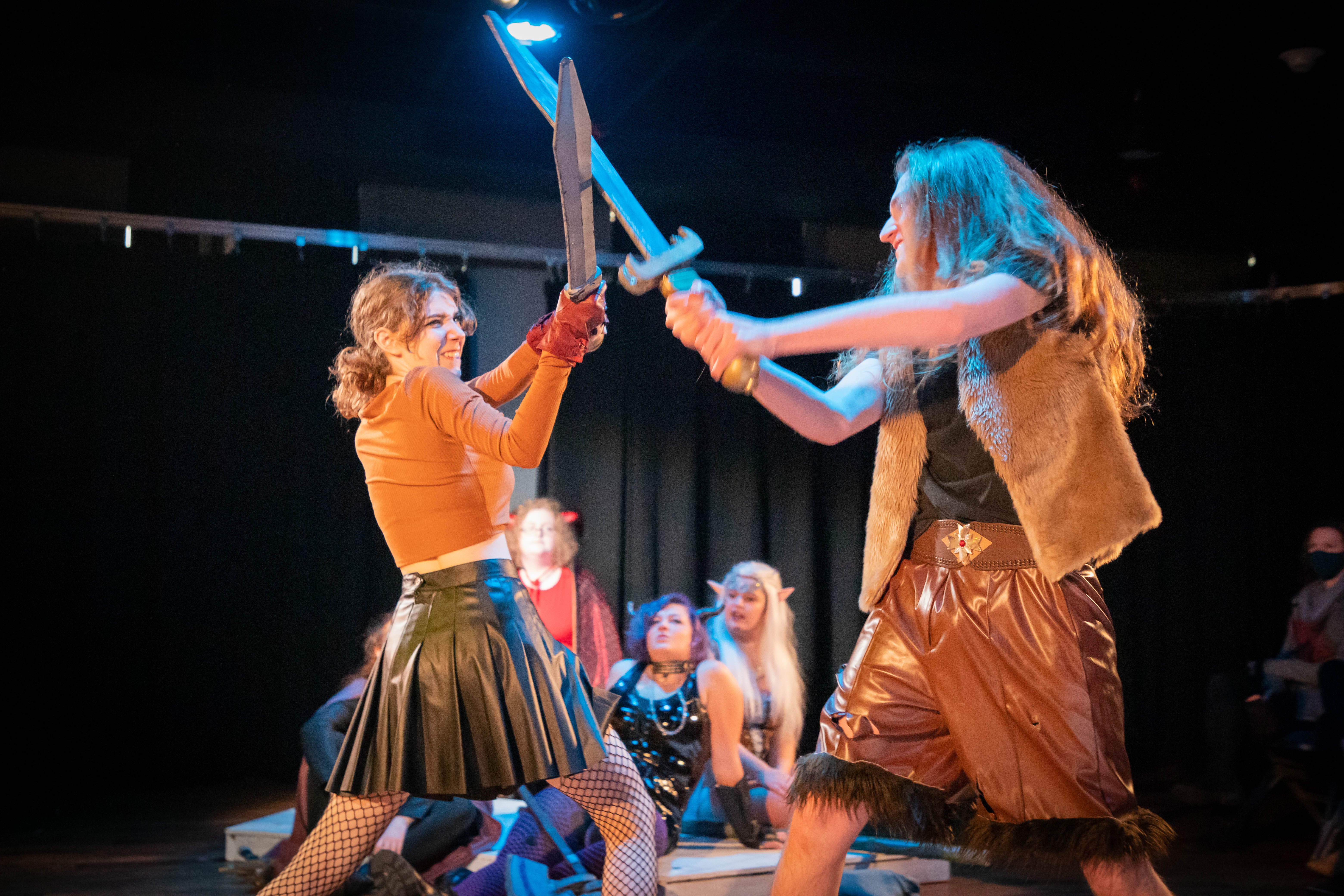 “The fighting choreography was fun and new for a lot of us,” said Andy H. ‘22. “We learned all of the different hits, and we did it over and over again. It would get so intense, and it was really fun.”

Fighting these monsters required some incredible weapons, which was where the student theatre tech department stepped in. These students had the challenging task of creating weapons, such as battle axes, swords, and staffs, that looked great on stage, but were also lightweight for the actors, and durable enough for the fight scenes.

The creativity in designing and building these weapons was endless. Using materials that ranged from Wiffle Ball bats to foam and dowels, these students were able to create innovative designs that brought the battles to life. In addition to the sets and props, students in theatre tech, also designed and ran the sound and lighting for the production. Creating cues on the new theater lighting boards, and running the entire show.

A Production with Purpose

Whether it was the return to in-person theatre or the topic matter of the play that tackled deep themes of loss, everyone felt this was a production with a lot of purpose behind it. 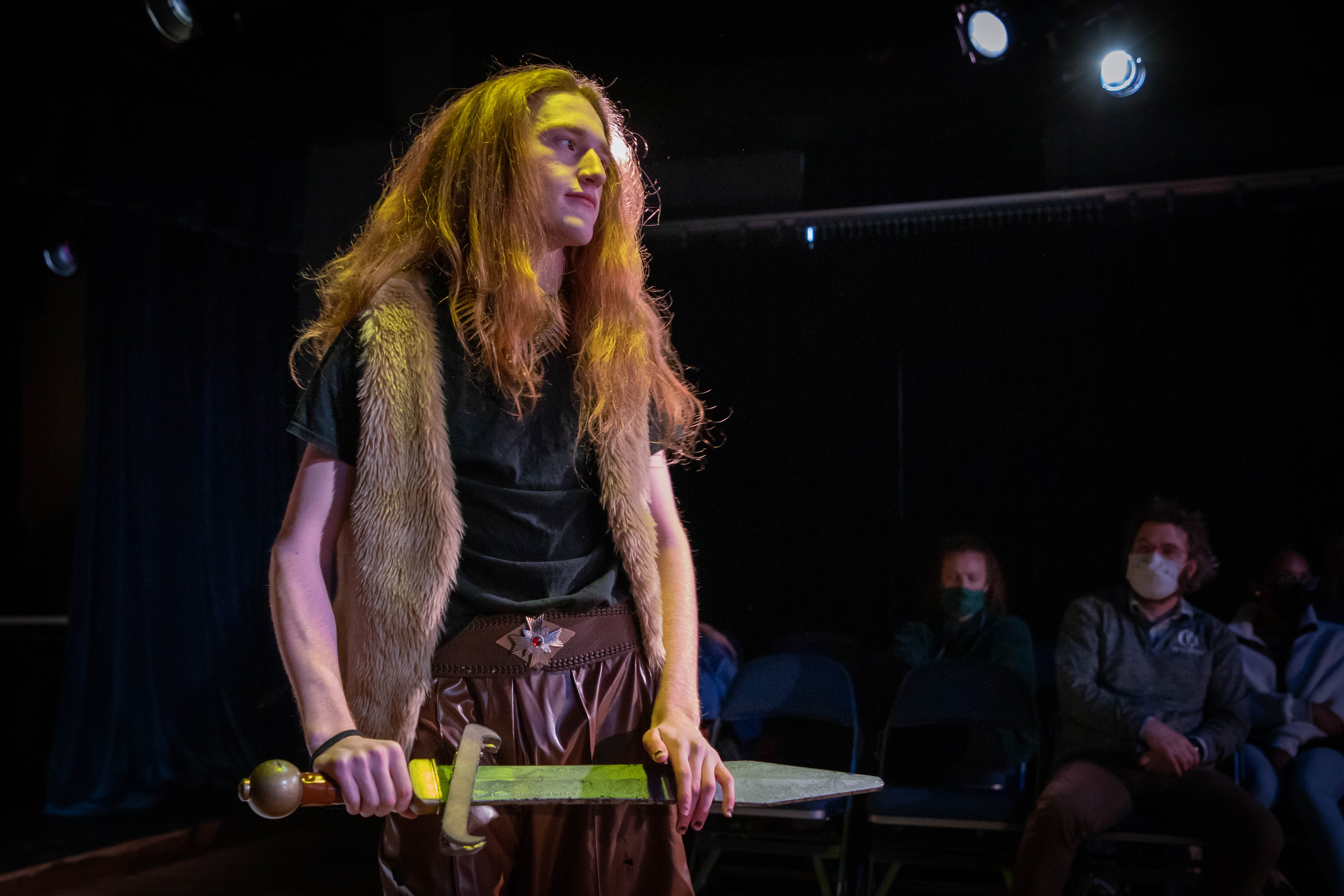 As students rehearsed and the opening night got closer, everyone felt the pressure, “It’s stressful and exciting at the same time, it’s everything rolled into one,” said LaCoste.

Throughout the rehearsals, the group came together over the common goal of being ready to put on the best show possible by opening night. Lines were rehearsed, the choreography was perfected, sets and props received their final coats of paint. Looking back on the process, students saw some parallels between the show’s story and their own,

“The story of the play is about many people coming together around one community,” said Andy ’22.  “I feel it was the same for the cast and crew. We had so many students in the production that I hadn’t met before, but throughout the play, I got really close with them.”

As the seats began filling up for the first performance, the students were going through their traditional warm-up games, eager to take the stage, and perform in front of an audience again. The students gained from the experience in ways that will last well beyond the curtain calls on closing night,

“Throughout the process, the students realize that they are capable of more than they ever imagined,” said LaCoste. “That is what theater is all about in the long run, it allows you to see something in yourself that you didn’t know you had.”

With the fall production behind them, CH-CH’s Theatre Department has already begun work on their next production, the winter musical, “Kiss Me, Kate”.